Netball was derived in England back in 1895 when a Canadian immigrant from the United States changed the rules of Basketball. In 1963, the first world tournament was held in England with the participation of 11 countries. After this inaugural World Cup, it continued to be held every four years. Currently, Netball is played in more than 60 countries, recognized in 1995 as an Olympic sport, and in 1998 as part of the Commonwealth games.

The New Zealand Netball League has more than 25 years of history. 2022 is the sixth season with the current Premiership format, in which 6 professional franchises compete. So far, there have only been 3 champions, with Northern Mystic as the current defending champion from the 2021 season.

There are 6 Clubs that compete against each other for 12 rounds.  This determines who will play in the Final Series with the winner proclaimed as the Champion of the 2022 season. According to the IFNA ranking, the ANZ Premiership alternates with Australia as the most prestigious netball league in the world. 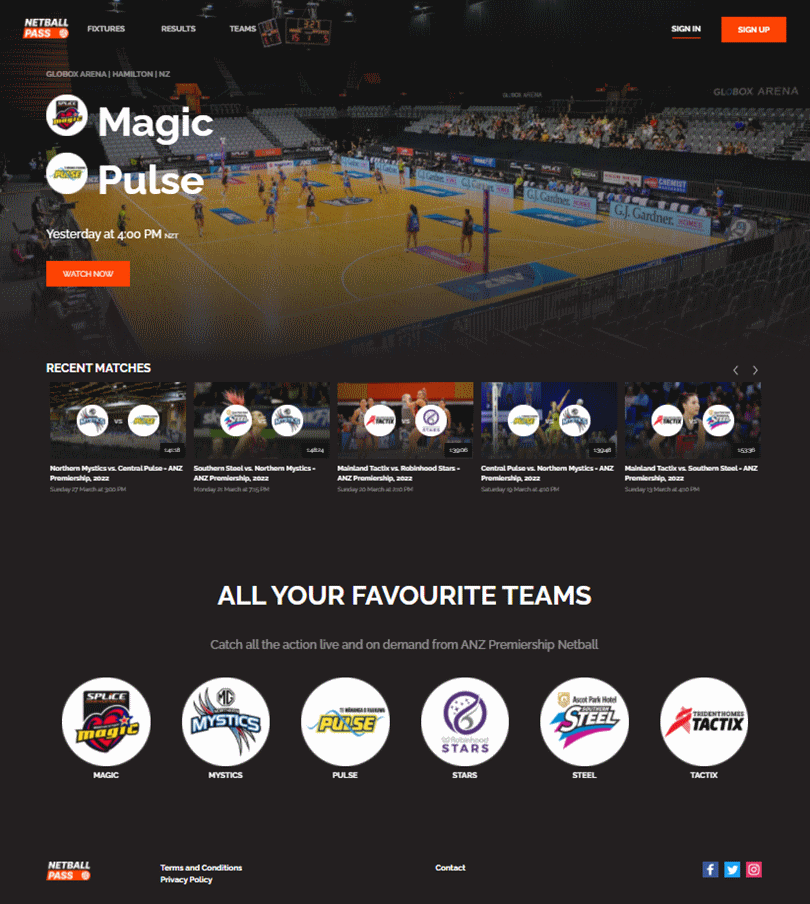 Netball Pass is the ANZ Premiership streaming platform. Created by StreamViral, the UK company specializing in OTT solutions for sports and leagues, Netball Pass is a fully customized solution that broadcasts all the 2022 games Live and On-Demand.

The ANZ Premiership launched its platform to achieve 3 goals: -

The broadcast OTT channel created by StreamViral is designed to provide an excellent user experience for netball fans globally including a fixtures calendar, scores of the entire season, tables, 100% of the matches Live or OnDemand, and highlights. The platform can work across different devices.

One of the challenges faced by StreamViral was the time for implementation. In only 2 weeks, StreamViral delivered a fully tested solution that was open for new subscribers from all over the world.

As part of StreamViral’s end-to-end service for ANZ, all live transmissions are managed by StreamViral MCR operations team.  The 24x7 support team provides an end-to-end service managing the ingest of live SkySports streams that features a pre-match show, the live game and post-match interviews.

During the transmission the operations team monitors the streams to ensure the highest possible quality of the transmission, ensuring the best viewing experience. Once the game finishes, the team creates the OnDemand (VOD). On-demand has proven to be important for the league and accounting for over 75% of consumption, with a global fan base across a wide time zone.  Fast on-demand turnaround  has been a major benefit of the OTT implementation which has increased viewer global demand.